One set of electronics with your choice of transducers 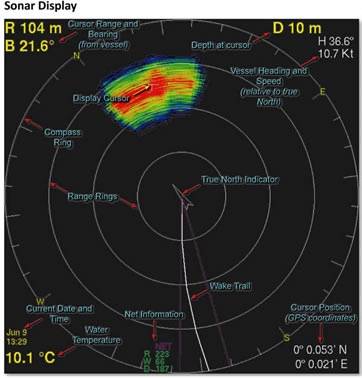 From the beginning the MAQ 90 has far exceeded my expections. It has been so easy to use and we got results from the very first usage off the Garden patch on Albacore. I was seeing albacore at 400 meters. On the first day 400 fish vs other vessesls 100 - 150 fish. Its fishing from patch to patch and following schools to come back on them. Consistent 700 & 800 fish days.

It has really opened my eyes and I cannot ever see Albacore Trolling without my MAQ 90.

I can see a huge potential for using my sonar over a range of fisheries. It's still early days and I am lookng forward to the Blue fin season.

we were marking those small 150lb blues (marlin) at 600 meters.  we marked a bigger fish at 750 meters. we never raised this one, however, from the mark on the sounder, it could have been in the 500 to 700lb range.

one of the spanish long captains, emailed me and said I would be able to mark a large marlin(900lb) at 900 meters.With the use I have had with the MAQ, I have no doubt the big fish in cairns will mark clearly at that range.

SOme of my favorite functions of the MAQ

More often, I use the MAQ in the OMNI search mode, with scan selected.  This changes the tilt angle of the beam between continuously scanning the water colum. Once a fish is marked, I turn off the scan, and put a event marker on the fish. I then alter the range and tilt to achieve the best picture, all the while getting closer to the target.

If I am in a area with the possibility of large feed or bait schools down deep, I use the trawl mode to look close to the surface for individual fish, at 10 to 70 meters, then on the second screen look down at 150 to 300 meters in search of deep feed.

The trawl function,  allows the user to search in 2 different ranges and tilts angles on 2 screens.  so example, the screen is split in half.(top n bottom) the top range may be set at 750meters, and tilt at 6 degrees, searching for surface and midwater fish. while the bottom screen, will be searching say a tilt of 13 degrees, and range of 400 meters. therefor, its very hard to miss a fish!! or large amounts of deep bait, and feed.

The unit has very easy control, with the joystick. and has a heap of settings to tune the unit to the given conditions, and target species.  On the screen it has audio, and this can be controlled and focused in any direction.  the screen  also show vessel track, which comes in very handi once a fish is marked.I use the event marking function, so once I mark a fish on the screen, its very easy to track the fish by either selecting AUTO mark,  or Manual mark. Auto track will automatically alter range and tilt settings to follow the fish.So even if you loose sight of the fish on the screen, because you have put a target lock on the initial fish mark, you can go to the area, and begin a more thorough search.  the fish is NEVER far away the reason for loosing them, is usually because they are swimming fast or hunting for food and move through the water colum quickly.  I then set the unit of a scan mode and increase the vertical band width to 10 or 20 degrees. this enables me to search through the greatest amount of water colum.   the sonar beam will scan through a range of tilt angles, 6 degrees to 13 degrees, or if I think it is deeper, 10 degrees to 22 degrees.   In this situation it is very common to see the fish on the sonar being raised and swimming up toward the boat from behind you!the sonar will also give target heading and speed.

another feature I like and use often is the vertical beam width adjustment. either 5, 10, 20 or R can be selected.5 degrees gives the greatest range and bearing discrimination, and reduces surface clutter and is what I use 90% of the time.  However, I often change to a wider beam width, if I loose a fish mark(as described above) and want to search close to the boat the maximum amount of water colum.The "R" setting is for rough weather, the unit transmits of 5 degree, and receives on 20 degrees. these means when the vessel is moving around in large sea's marks/fish are not missed!

The unit also has very good Noise and interference rejection capabilities. which means a clearer screen and better fish/target definition.